The Cochrane review about antenatal steroids in reducing risk of infant mortality and morbidity is an important one in Cochrane's history. Cochrane's logo is based on the forest plot from the original publication in 1982. This review has recently been updated and lead author, Fiona Stewart, tells us how the logo might look now, base on the current data.

What does this update tell us?
Our overall findings can be summed up like this: antenatal steroids given to women at risk of preterm birth reduce the risk of infant mortality and morbidity. In other words, babies are more likely to survive and less likely to have serious illness, such as respiratory distress syndrome and intraventricular haemorrhage (bleeding in the brain). The evidence also suggests that there is probably little risk of death or infection in the mothers who receive the steroids. 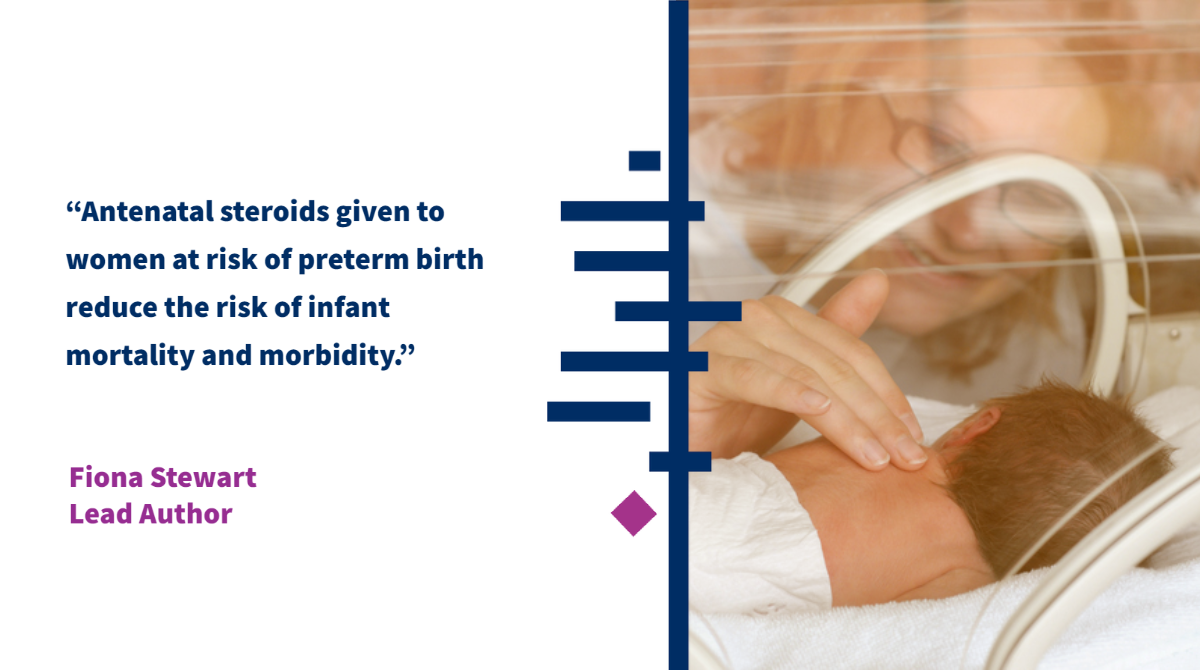 What is different to the last version?
In the last version of the review, the authors identified a distinct lack of evidence from low- and middle-resource countries. Since then the World Health Organisation has organised two large randomised controlled trials to address precisely this gap and one of those trials is now included in this latest update. This means we now have a much better idea of the benefits and risks of antenatal corticosteroids in a wide range of settings where there are different levels of healthcare service provision.

Another important difference from the last version is that we have taken into account the trustworthiness of the evidence, in addition to the standard methods that we use to assess risk of bias and to rate the overall certainty of evidence. We used a set of criteria, developed by the Cochrane Pregnancy and Childbirth group, to assess whether each trial in the review can demonstrate its trustworthiness in terms of research governance and feasibility of results. Where we had concerns about a trial’s trustworthiness we contacted the study authors for further information. Where our concerns were not resolved or where we did not receive any response, we did not include those trials in our analysis.

The Cochrane logo is based on the forest plot of the first publication of this review. Each horizontal line represents the results of one study, while the diamond represents the combined result - our best estimate of whether the treatment is effective or harmful. The diamond sits clearly to the left of the vertical line representing “no difference”; therefore the evidence indicates that the treatment is beneficial. Would this update to the review change the forest plot that the logo is based on?
The Cochrane logo represents what the forest plot would have looked like in 1982, had a meta-analysis been carried out using the trial evidence that was available at the time for the outcome of neonatal mortality.  Now, decades later, we have substantially more evidence and if the logo was created from scratch now we wouldn’t be able to fit enough horizontal lines in it to illustrate the number of trials we now have included in the analysis! Most importantly, the diamond at the bottom would still be in the same place because the analysis in the logo and the analysis in our update both show that antenatal steroids reduce the risk of neonatal death compared to placebo or no treatment. 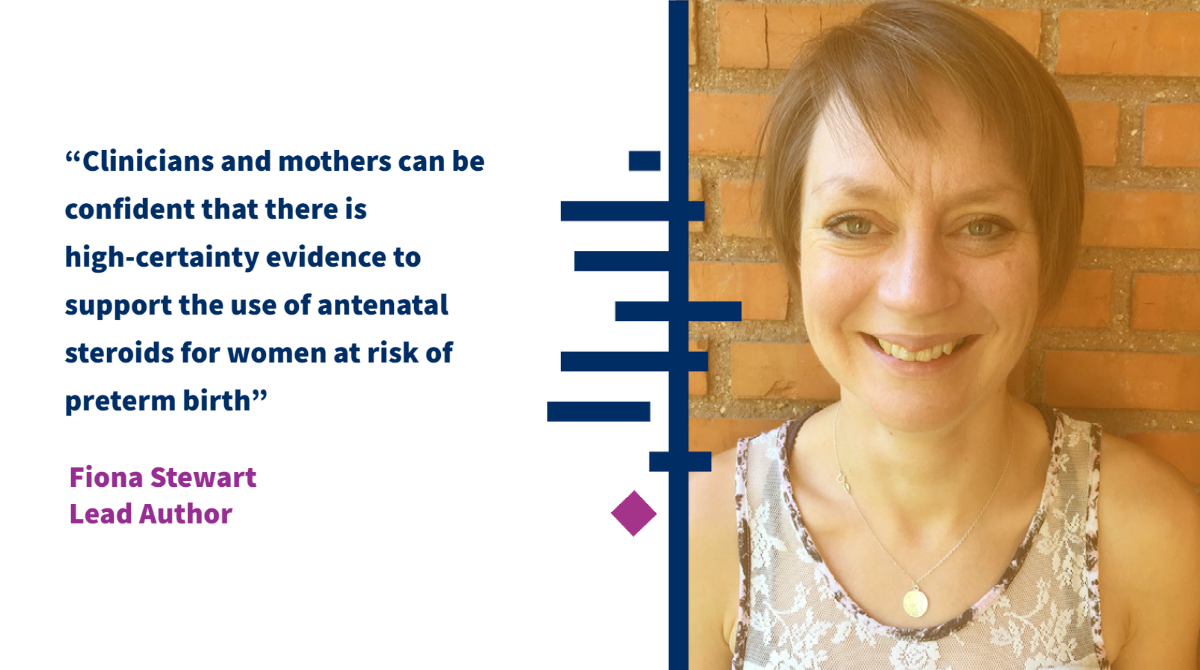 What can clinicians/and or mothers take from this evidence?
Clinicians and mothers can be confident that there is high-certainty evidence to support the use of antenatal steroids for women at risk of preterm birth, no matter where you are in the world since the evidence is consistent across high-, middle- and lower-resource settings. The evidence also demonstrated that giving antenatal steroids to mum is safe and does not result in any long-term harm to their babies. However it is important that they are only given to women considered at high risk of preterm birth because appropriate timing is very important to ensure maximum benefit.

Will this review be updated again?
Yes, the review will be updated to include the results of trials that are still ongoing. There are still a few remaining questions; firstly, whether antenatal steroids have the same benefits in different gestational age ranges. The majority of the evidence in the review comes from trials where the women were very preterm (approximately 28-34 weeks). We would like to know if the effect of corticosteroids compared with placebo is similar at the later preterm period (approximately 34-36 weeks). We know of at least one large trial – ACTION-II, organised by the WHO – which is investigating antenatal corticosteroids compared with placebo in women at 34-36 weeks. We anticipate being able to include the results from that trial, and four smaller trials that are ongoing, in another update in a year or so. Secondly, we are interested in the effects of antenatal steroids in particular groups for whom there is currently limited evidence; for instance, women with medical problems in pregnancy such as diabetes, or women who are carrying more than one child.

Wearing Cochrane evidence: a personal story of impact
Rebecca Selby, a mum of four, shares how this Cochrane Review has impacted her family.